Arma-d and dangerous. Bohemia Interactive is back with another bundle of Arma games and expansion packs. Get titles like Arma 3, Arma 3 Apex, Arma 2, Arma 2: Private Military Company, and more. Plus, your purchase will support American Red Cross! 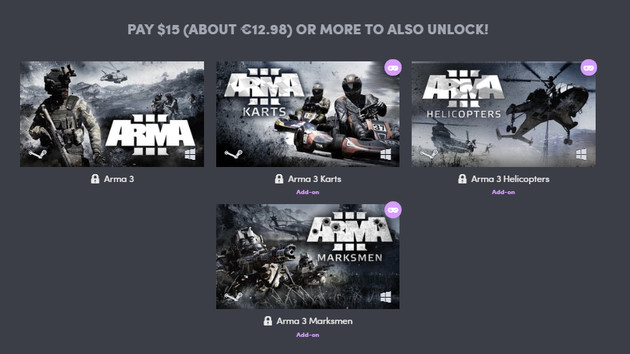 The rise of the (Square) Enix! After vanishing into the depths of no-bundle despair, the mighty Square Enix has returned with its second Humble Bundle! Pay $1 or more for Hitman: Absolution, Supreme Commander 2, and Hitman GO. Pay more than the average price, and you also get Thief, Murdered: Soul Suspect, and Deus Ex: Human Revolution - Director's Cut. Pay $15 or more, and you get all of that plus Tomb Raider and Sleeping Dogs. 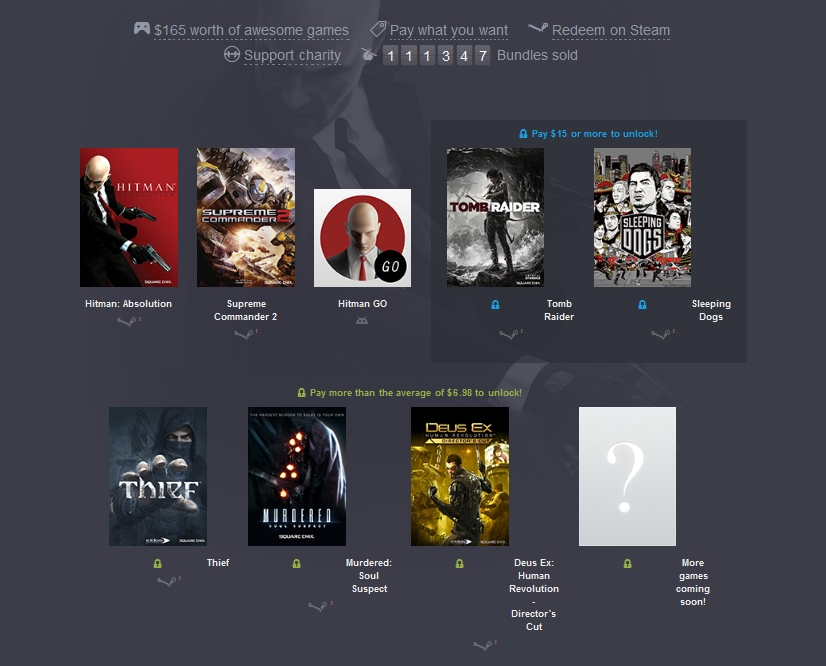 Pay what you want for Skara - The Blade Remains (Early Access Starter Package), Alpha Kimori™: Episode One, and Avadon 2: The Corruption. Pay more than the average price, and you also receive CONSORTIUM, Fighting Fantasy: The Forest of Doom, and Deep Dungeons of Doom. Pay $10 or more, and you receive all of that plus Halfway.

Price: Your choice! In other item shops, these games go for up to $77, but here at the Humble Bundle Item Shop, you pay what you want.

​
SEGA! To get the full effect, imagine us saying it like the guy at the old logo screen. Then imagine us saying it ten times. Then twenty. Then twenty times ten. That's how excited we are! Pay $1 or more for the Dreamcast Collection (SEGA Bass Fishing, Crazy Taxi, Sonic Adventure DX Director's Cut, and Space Channel 5 Part 2), NiGHTS Into Dreams, Sonic & All-Stars Racing Transformed, Total War: Rome II - Caesar in Gaul DLC, and the Miles Jacobson's Tactic DLC for Football Manager 2015 — we'll even throw in exclusive Total War: Attila wallpapers on top of all that! Pay more than the average price, and you'll also get Empire: Total War and Company of Heroes 2 - The Western Front Armies: Oberkommando West. Pay $12 or more, and you'll get all of that plus Total War: Shogun 2 - Fall of the Samurai. But that's not all! Pay $50 or more to also receive a limited edition Dreamcast t-shirt from Fangamer.


​
source
Continue...
Gaming News Humble Weekly Bundle: Team 17 Evolved
0 6,274 by DJ aka GDR DJ : Nov 13, 2014 at 9:23 PM
Enter a Wormshole. Come quick! We recently discovered a shortcut between Worms games and other games from the people who made Worms. Pay $1 or more for Worms, Worms Armageddon, Worms Ultimate Mayhem Deluxe Edition, Worms Blast, Worms Pinball, Worms Crazy Golf, Superfrog HD, and Alien Breed Trilogy (includes Alien Breed: Impact, Alien Breed 2: Assault, and Alien Breed 3: Descent). Pay $6 or more to also get Worms Revolution Gold Edition, Worms Reloaded GOTY Edition (includes mobile counterpart Worms 2: Armageddon), Overruled!, and Light. Pay $15 or more and you get all of that PLUS Flockers and a Worms Clan Wars 4-Pack (one copy for you and three to share with your friends).

​
Humble and source
Continue...
Gaming News Steam Halloween Sale 2014
0 5,800 by DJ aka GDR DJ : Oct 30, 2014 at 3:11 PM
The Steam Halloween Sale is on now! Users with hypselotimophobia have nothing to fear, but the rest of us do. Watch out for ghastly discounts on hundreds of frightening titles across the Steam catalog. Zombies, vampires, and ghosts-- Oh ...

All title listed below are free-to-play and also on sale in case you decide you want to buy them.

The 10 titles being offered are:

​
If you haven't yet hopped aboard the Dragon Age train, here's your chance: BioWare's epic fantasy RPG Dragon Age: Origins is now On the House.

I'd say Dragon Age: Origins goes a bit beyond those games. It's few years old now, but it's still a game well worth playing, both as a sweeping, party-based RPG and an entry point into BioWare's home-grown fantasy setting. And with Dragon Age: Inquisition set to come out next month, this is the perfect opportunity to give it a shot.

Origin website
Continue...
Site News Forum Updated
5 6,807 by hellreturn : Sep 10, 2014 at 1:06 AM
I have updated forums to new version. New features should be available to users and staff.

Over the period of time we will be adding new stuff on the forums. Staff would get relaxed from spam attacks